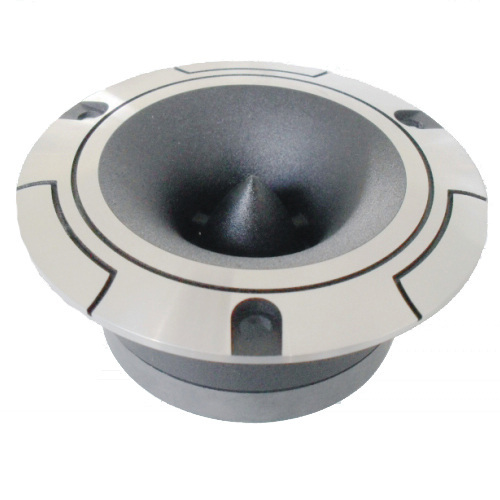 
All types of loudspeakers convert an electrical signal into sound. Within sound systems or entertainment systems, different loudspeakers work together to produce the sounds required. Tweeters and super tweeters are so named because the sounds they produce sound like the high pitched "tweeting" of birds. At the opposite end of the spectrum are woofers, so named based on the low-pitched "woof" sounds made by dogs.


There are many different designs of tweeters, but all are designed to convert an electrical signal into a mechanical movement of the air. The dome is the part of the tweeter that moves, and as the frequency to be produced gets higher, the dome gets smaller. Super tweeters have the smallest domes, so they can produce the highest frequencies. The downside is that these smaller domes have less area, which can limit their output, particularly at the bottom of their range.


A super tweeter can come as part of a home stereo system or home theater, or it can be purchased as an add-on. There is some controversy to the use of super tweeters though. This mostly stems from the fact that most sounds played by a super tweeter cannot be heard by humans.


Many manufacturers point to the fact that by adding a super tweeter to your home entertainment center, the resultant sounds will be much more realistic. They claim that the super tweeter works with other loud speakers in the system to have less errors when the sounds are created from the signal. The idea is that the super tweeter works with all ranges of frequencies to make the sound being produced that much richer and fuller, and more enjoyable to all listeners overall.


There has also been some research into the vibrations caused by these sounds. All frequencies of sound travel through the air as vibrations, or waves. Sounds that can be heard by humans cause vibrations within the ear that then travel to the brain as nerve impulses. There are some theories that although the higher frequencies can't be heard, they can stimulate small hairs or even bones within the ear, so they are still perceived at some level.